Environmental educators cultivate a love for the Sonoran Desert by engaging with the community and encouraging each student to develop a meaningful relationship with the natural world, becoming the next generation of environmental change makers.  Our staff and interns work together in a collaborative, supportive environment with the shared intention of creating a space where children from southern Arizona can forge a deep and meaningful connection with their natural surroundings. 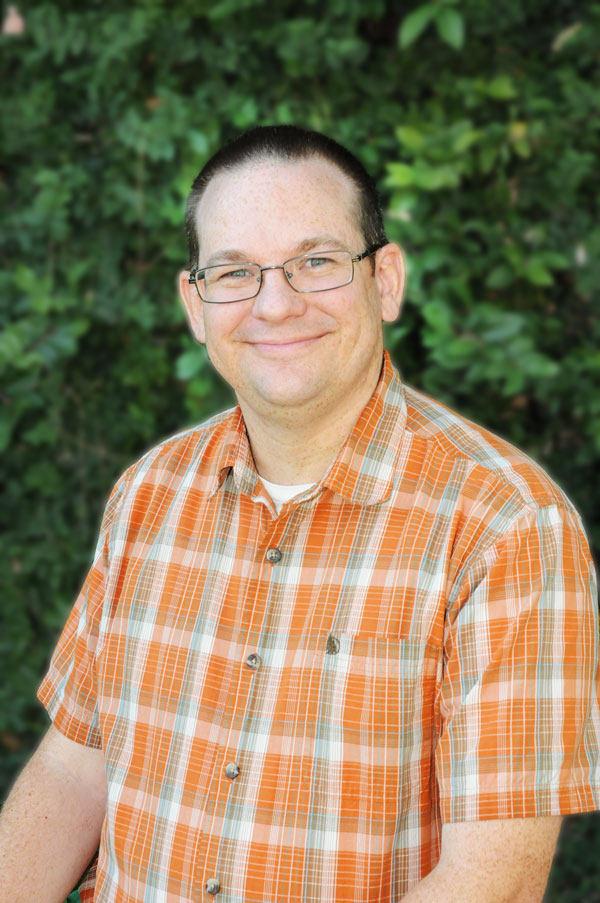 The 2021-22 program year marks Colin's 18th year at the Cooper Center.  His love of nature started during his childhood in Upstate New York, exploring the fields, forests, and creeks near his home. His high school biology teacher, Mr. Coaster, sparked his interest in environmental science and a family trip west in 1994 carried him to Northern Arizona University in Flagstaff in 1996.

Colin graduated with a B.S. in Environmental Science in 2000 and decided to focus on communicating environmental issues and concepts to the public at large.  This began with work on grassroots campaigns with the Fund For Public Interest Research as a Field Manager in Oregon and later Canvass Director in North Carolina, building membership and political support for such groups like Sierra Club, Human Rights Campaign, and the State Public Interest Research Groups (PIRGS).  In 2001, Colin's love of the West brought him to Tucson, AZ, where he worked briefly for Bookman's Entertainment Exchange before joining the staff of the Cooper Center in 2003.  He received his Master's Degree in Elementary Education from NAU in 2005.  Colin has served the Cooper Center as an Environmental Education Specialist, Program Coordinator, Assistant Director, and Director, building strong relationships with teachers across Southern Arizona and with the community at large.  He can't imagine working anywhere else.

Colin is married to University High School math teacher Leiba Schuneman and together they have 2 sons, Gavin and Sawyer, and 2 cats, Angie, and Rusty.  In addition to his duties at the Cooper Center, Colin officiates high school and youth football.  He also enjoys cooking, reading, hiking, video games, music, and movies. 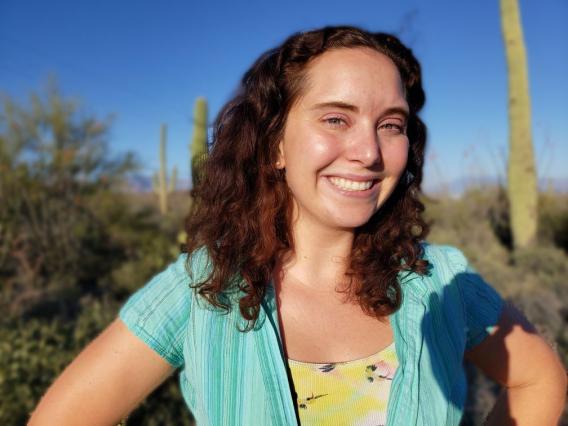 Mariah was born and raised in Tucson Arizona and loves being a part of this community.

Mariah has been with the Cooper team since 2019. She started as an instructional specialist and has since been promoted to program coordinator.

Before Cooper Mariah has interned with the Tucson Botanical Gardens and has helped with the community garden program at the University of Arizona. She got her bachelor's in Environmental Studies and has since worked at both Children's Museums in town, as well as Basis Oro Valley as a first-grade math and science teacher. She is excited to use her environmental knowledge, love of the desert, and her teaching experience here at the Center!

In her spare time, she likes to dance, draw, and bike the loop. 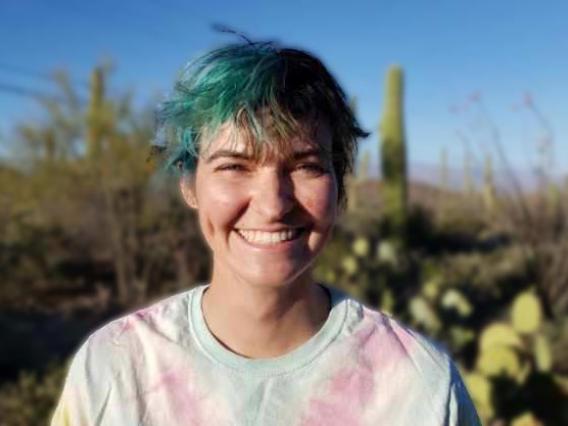 Paige (they/them) was welcomed onto Cooper’s education team in August of 2018, following their recent move to Tucson and the completion of their B.S. in Biology from Kansas State University. Since then, they’ve absolutely loved exploring the Sonoran Desert and learning from its community members. They feel revitalized when working with young learners; the stories and experiences each child brings with them to Cooper never cease to inspire and reshape Paige’s own view of the world.

An avid cyclist, horseback rider, and hiker, Paige recognizes the privilege they’ve been afforded when it comes to feeling safe in outdoor spaces. They are committed to ensuring that the outdoors are welcoming, safe, and accessible for all people. 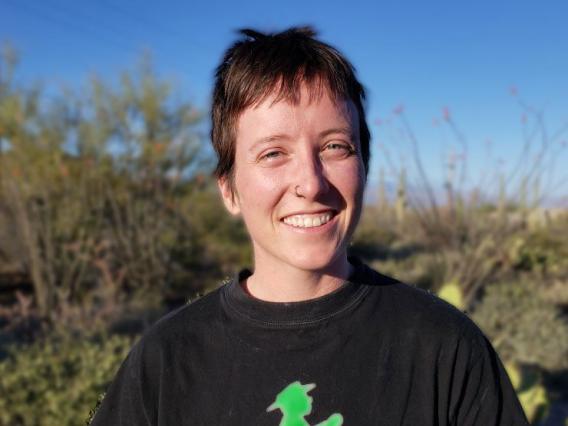 Brittne is pleased to join the Cooper staff this 2018-2019 season. Recently having moved back to Tucson Brittne couldn’t be happier working in the Sonoran Desert she’s called home since birth.

Before working at Cooper, Brittne served three Americorps seasons on conservation corps based in Tucson, Maine, and Montana. These experiences allowed her love of the outdoors, public lands, and conservation to flourish, and instilled a passion and respect for the environment that is supported here at the Cooper Center. Brittne is excited to work with youth and inspire them to share that same reverence for the natural world.

In her spare time, Brittne loves to ride bikes, hike, and cook! 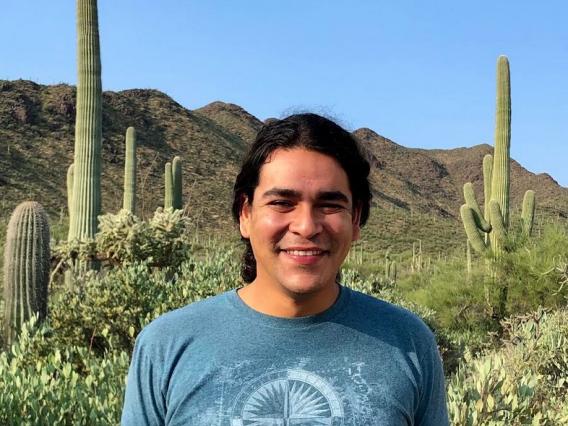 Isaac (he/him) is a 1st generation American from a Mexican immigrant family, he was born and raised in Tucson, AZ, but spent half his youth growing up in Huatabampo, Sonora Mexico, a small seaside town where his family is from. He has a special love and bond with the natural wilderness especially the Sonoran Desert he has calls home where his favorite animal is the wise Great Horned Owl, and his favorite plant is the majestic Saguaro Cactus.

Isaac joined the Cooper Crew in 2021 and has been very excited to work with this team. Before Cooper he worked with TUSD as a behavioral mentor for 6 years; 3 years at Robison Elementary and 3 years at Mansfeld Middle School, in that time he learned a lot about the youth in Tucson, especially how amazing they are! Isaac has a passion for our environment and for passing on that love to the hearts of the next generations. Isaac believes humans have a strong responsibility to care for our natural world which is what led him to graduate from the University of Arizona with his bachelor’s in psychology and a minor in philosophy in hopes that he could find a way to connect the disconnect between man and the natural world. 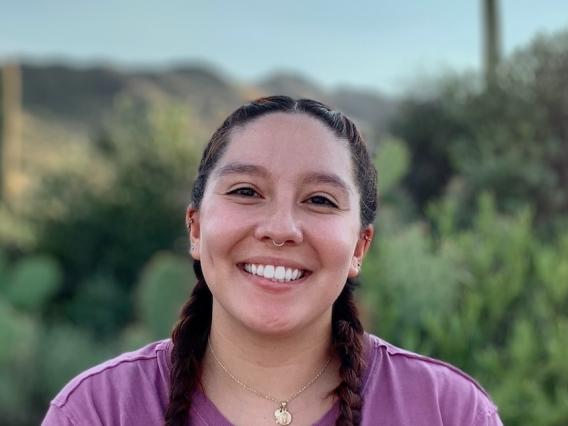 Alexianne (she/her) is originally from Glendale, Arizona but has deep familial roots to the Tucson area that led her to move down here in 2017 to attend the University of Arizona and learn more about her personal history.

While there Alexianne received her B.S. in History and completed two minors in Mexican American Studies and Adolescents, Community, and Education. Alexianne has always held the Sonoran Desert close to her heart and is very excited to be working in the environment she has appreciated her whole life. She hopes she can bring her love for the desert and passion for history to the Cooper Center in fun and exciting ways that will allow youth to expand their knowledge on the histories of the lands they are living on as well as inspire them in new ways to care for the beautiful desert we call home.

In her spare time Alexianne loves to watch movies, paint, and make jewelry for a small business she and her 2 sisters have together. 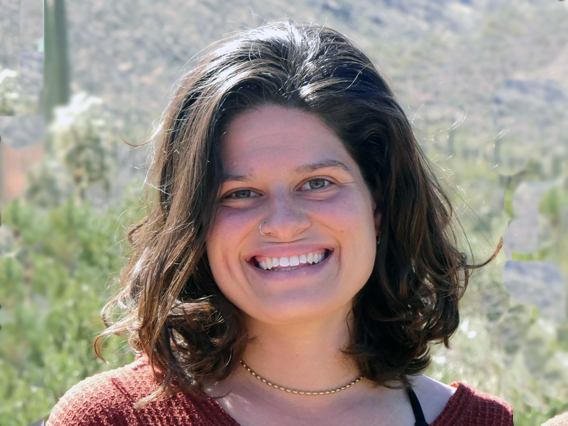 Jen is new to the Sonoran Desert!  She started working at the Cooper Center in February of 2022. After graduating from the University of Central Florida, with a degree in Public Administration and a Minor in Spanish Language, she did an AmeriCorps term with Arizona Conservation Corps, where she quickly fell in love with the Sonoran Desert and all that it has to offer. However, shortly after her term, she left to teach English in the south of Spain. Jen continued to share her fondness of nature with hopes that her students would be motivated to see what this beautiful planet has to offer.

Jen is happy to be back in Arizona, and a part of the team! She wants to encourage students to explore beyond their comfort zone and hopes to provide positive outdoor experiences for all who visit.  Camping, hiking, kayaking, eating good food, and listening to spoken word are some of Jen’s favorite things to do. Besides recreating outside, Jen’s favorite thing to do is to eat and try new foods.  She started a food club with 2 members and counting.

Camp Cooper welcomes Jen (she/her) as one of our new educational staff members.  Jen is from Orlando, FL. She has been loving all the desert plants, as she explores in the Sonoran Desert, but Jen loves creosote the most.  Jen graduated from the University of Central Florida, with a degree in Public Administration and a minor in Spanish Language.